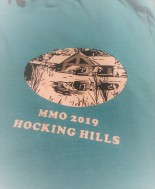 I have taken a break from card making to take on a new hobby- creating SVG files and cutting the image on vinyl using a Cricut Maker and then heat pressing them onto tshirts.  This shirt was one of the more difficult images that I did.  My husband and his brothers go on an annual Morgan Man Outing (aka MMO) and his dad always made generic tshirts for the event.  Well Bob is no longer alive so my husband decided he wanted to take on the annual tshirt project and step it up a bit.  So he bought me a Cricut for Christmas that I really did not want and it sat in the box unopened until mid July when the talk of the MMO tshirt came to light.  My husband had it in his mind that the Cricut would magically make his idea happen.  He had a photo of the cabin in Hocking Hills that they were staying at and wanted that true to life picture converted to his t-shirt design.  Well that meant we had to open the Cricut box and figure this project out!  Many man hours learning the Cricut design software and understanding the the differences in vinyl and the tshirt making process and even purchasing a commercial heat press we finished the tshirt and were able to finish 11 tshirts in a rainbow of colors.