Let’s hear it for the Vets!

Happy Veteran’s Day to all those who have served or are currently serving- thank you for your service!  To honor them I made a single layer card using the Stampin Up Waterfront #146386 stamp set to create this patriotic scene.

Happy 4th of July to all our USA family and friends.  To honor America, I made a patriotic card  featuring the chairs from the Seasonal Layers #143751 dies.  I hand colored the chairs in the flag pattern using Stampin Write markers.  The background was done using the High Tide #143006 stamp set from Stampin Up.  The sentiment was cut using the now retired Celebrate You die.

Happy Veteran’s Day to all our vets that have served or are serving.  To honor them  I made a card using the Waterfront #146386 stamp set from Stampin Up.  It’s always great to use a stamp set for other ways than intended. 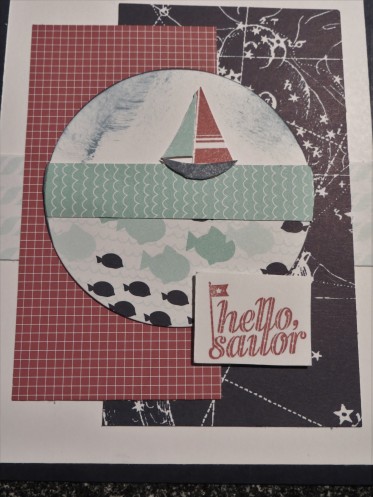 I was clearing out my retired Stampin Up DSP and came across this very old paper but new it was perfect for a new baby card and to showcase how wonderful it is to combine various patterned paper from the Stampin Up collections. 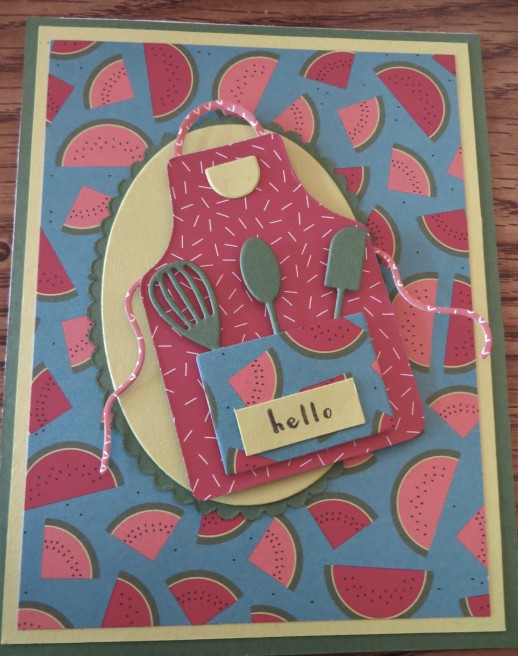 Happy Fourth of July! I hope everyone in the USA is celebrating Independence Day and commemorating the adoption of our Declaration of Independence on July 4, 1776.  Since most Americans are off work they celebrate with family reunions, picnics, BBQ’s parades and fireworks! So my card today fits the bill.  The paper is from the now retired Tutti-Frutti DSP collection from Stampin Up.  The apron and tools are from the popular Apron Builder Framelits #145661 and the sentiment is from the now retired Fruit Basket stamp set from Stampin Up.

Memorial Day.  For today’s patriotic card, I started out creating the beachy background using the High Tide #143006 stamp set from Stampin Up.  I added 3 chairs cut from the Seasonal Layers Thinlits #143751 and the sentiment from the coordinating Colorful Seasons #143726 stamp set. 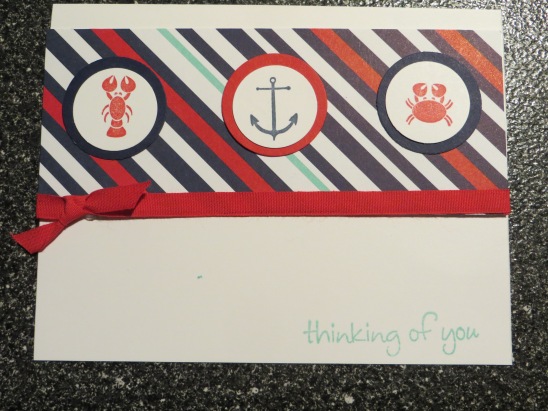 In honor of Patriot Day aka 9/11 or Sept 11 I am posting a patriotic card featuring red white and blue.  Patriot Day is a holiday observed annually on September 11. It is a day dedicated to remembering and paying tribute to the 2,977 people killed and numerous people who were injured during the terrorist attacks on September 11,2001, in New York, Washington DC and Shanksville, Pennsylvania, in the United States.

Patriot Day is recognized by United States law as the official day of remembrance for these tragic events, and has been observed every year since the attacks. Although the attacks took place within the United Stated, the shock and grief experienced in response to the attacks was shared throughout the world, and for this reason Patriot Day 2017 will be observed, not only in America, but across the world.  Traditionally, Patriot Day  is viewed as a time of honor and remembrance. Annually, on this day, American flags are flown at half-staff. The United State President asks fellow Americans to observe a moment of silence at 8.46am (Eastern Daylight Time), the time of the first plane collision into the North Tower of the World Trade Center.

Welcome Back to the USA Maddison!  Your Momma is beyond excited to have you back from your nearly year long German exchange program.  To all others, Happy 4th of July and celebrating the freedom of living in the good ole USA!  This was a quick card I made using very old Stampin Up ribbon and the stars were embossed in white using the Stampin Up Perpetual Birthday Calendar Stamp set (retired).  The sentiment is from the Colorful Seasons #143726 stamp set.  This was super quick and a great way to use up ribbon from the end of the bolt.

To all the members of the Armed Services…. Thank you for serving and making our world a better and safer place.  To honor our veterans, I used all retired Stampin Up products to create a patriotic card. The Maritime DSP is used for all the layers.  The world map is from the Going Global stamp set and the sentiment is from the Really Good Greetings stamp set.

I love all things patriotic and love bandannas even more.  So I combined that love to make a patriotic wreath.  The bad part is I have misplaced all my wreath hangars!